For quite a while, I haven't written the article fot this blog. I have been traveling frequently for a while, Japan, Taipei and USA. I was away from eating out in Taipei. But now I am back! I try to update more about good restaurants in Japan. Since 2020, I stay in Sapporo, Japan, and stay home for a while. Finally covid-19 situation in Japan is slowly getting better and feel a bit confortable to go out. So I start trying some restaurants. Once the border open again for traveling, I hope you guys can visit Japan, especially Hokkaido. We need you guys to boost the economy and please enjoy such a delicious food here. I share with you my experience at Restaurnt MINAMI, which located in Sapporo. I went there for lunch; which costs me 3630 yen only (exclude drinks and cheese.) Don't forget to take a note, so that you can't miss it when you come to Sapporo. :)
Posted by North at 7:51 PM No comments: 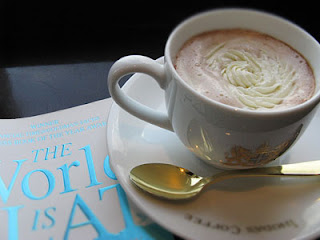 I already introduced this Inoda Coffee to you before, but I need to tell you… Their cocoa was amazing! I actually had their cocoa in February, but didn’t take a picture. Therefore, I came back here in August and had a cup of delicious cocoa! The waitress was a bit confused when I ordered cocoa, because cocoa is not a popular item in summer. ha ha. If you have a chance to visit Inoda Coffee, please try a cup of cocoa and enjoy the night view of Sapporo city! 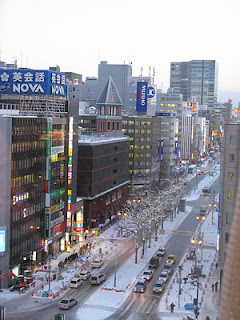 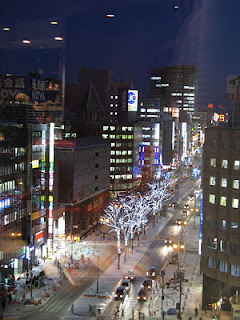 p.s. I am sure you can ask to put the whipped cream on the side. 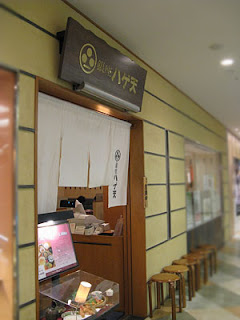 Do you know how tempura (てんぷら) was invented in Japan? Actually, tempura was originally from Portugal, so as tonkatsu (とんかつ). In 16th century, Portuguese Jesuit missionaries in the city of Nagasaki introduced tempura to Japan. Since then, tempura became one of popular Washoku (和食).

Hageten, from Ginza, started their business in 1928. Since then, they served an authentic tempura to us. There are many branches in Japan. There were actually two branches in Sapporo, but recently, one was closed. You can enjoy different taste in different branches, because of the skill of the Tempura chef. I went to Hageten at Stellar Place Sapporo. The chef was friendly and welcomed me for late lunch. 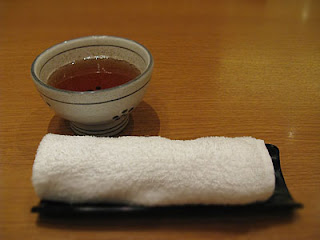 The best way to enjoy eating fresh tempura is to sit at the counter table and eat it right after the chef fries each seafood and vegetable as “okonomi” (お好み). Yet, this time was for late lunch, so I ordered “Hokkai Tendon Special” (北海天丼スペシャル), 1200 yen. Eight kinds of tempura over the warm steamed rice, salad, Japanese pickles (which is called Tsukemono) and red miso soup were served perfectly. It’s nothing but gorgeous. 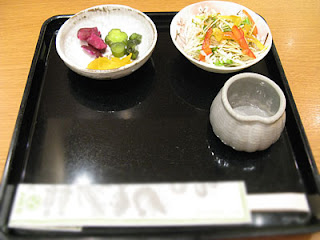 A well-trained waitress brought me a cup of houji-cha and oshibori (wet towel). Then, soon she served a tray with salad and tukemono. Of course, I needed to wait for a bit for tempura bawl. But it’s okay. 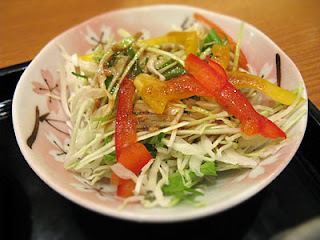 I enjoyed the easy salad with Japanese dressing. Slices of colorful paprika were decorated over the shredded cabbage and radish sprouts. Again, I enjoy not only the taste but also the color. 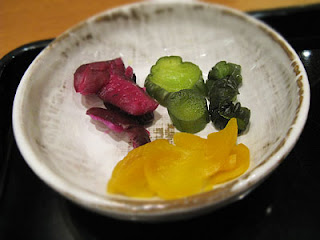 Look at this color combination! Just a little decoration on the tray, but it already gave me a good appetite. In addition, it is always good to eat tsukemono with something oily like tempura, because it keeps my mouth fresh. 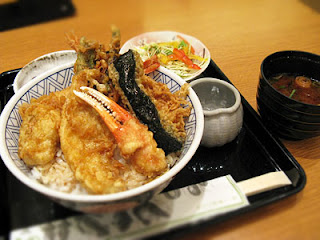 Even before I finished up the salad, Hokkai Tendon Special and miso soup were served. Red miso (赤だし) was used for miso soup, and it really matched with greasy food. Red miso has rich taste, so it refreshes my mouth. Some people prefer Shiro Miso (white miso), but the taste is too light for me. 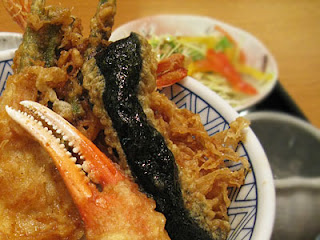 Two shrimps, three kinds of fish (Japanese squid and some white-meat fish), asparagus, nori and crab shell were perfectly fried. I started with fish. Wow it’s been a while since I ate such a delicious tempura. I was amazed by not only the cooking technique of the chef but also the freshness of this fish. The meat was so tender and it melted right after I put in my mouth. Shrimp was a bit small, but it was still sweet and tender. I was a bit disappointed that asparagus was too skinny! I expected a bit thicker one…

Overall, I was totally satisfied with their good quality of service and food.

ハゲ天：Hage Ten
http://www.hageten.com/
at Stellar Place Sapporo
Posted by North at 1:00 AM No comments: 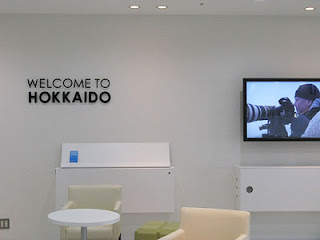 It took me forever to update my blog. I have many pictures of foods, but my writing is too poor to describe the deliciousness. Sorry for delay…

In this trip, I enjoyed fresh seafood at my house, and some new restaurants. I hope you can visit there when you ever come to Sapporo!!! 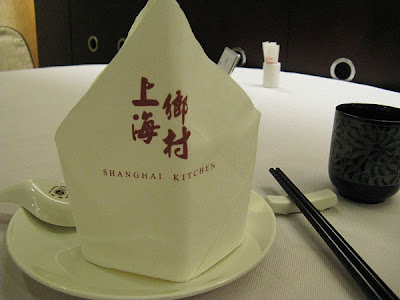 Shang Hai Xing Cun, Shanghai Kitchen, is one of popular Chinese restaurants specialized in Shanghai-style food in Taipei. Their signature item, braised pork, has rich texture of taste, with high quality of pork. My friend invited me for lunch. 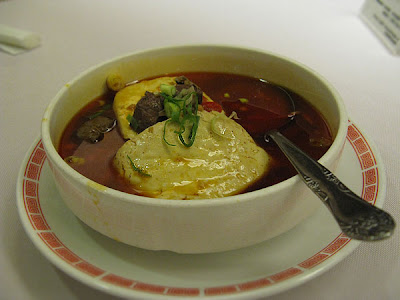 When people visit Taiwan, they always wonder what Stinky Tofu is. As you can guess, it is tofu with VERY STRANGE smell. It is really strange… I usually cannot stand it. However, I was surprised when this item was served in front of us. There was no such a smell! My friend told me that that is just because we were the only table who ordered Stinky Tofu. Ha ha. I see. If many tables order it, then we could SMELL it. 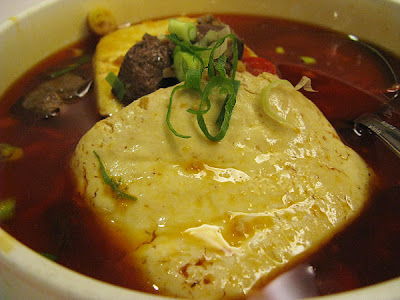 This Stinky Tofu (清燉臭豆腐) was steamed one, with spicy soup. Once I put my nose closer to the dish, yeah I could slightly smell it. It is stinky tofu. As you can see, soup was made of spicy oil and red pepper. Surprisingly, it tasted good. 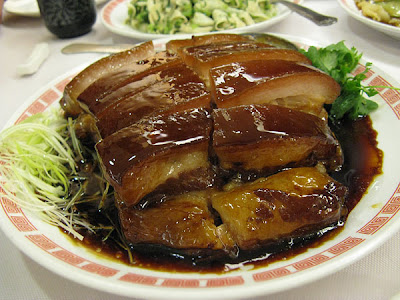 Here is their signature item, Braised Pork (東坡肉) (NT$ 420). I forgot to take a picture, but it was served with white bun (割包). Take one piece of pork, put on top of white bun with shredded green onion then enjoy the richness taste of the pork. Wow! I know the similar taste of this sauce, because on Japanese food, we have similar item called Kakuni (角煮). However, this braised pork was quite different. Tenderness, sauce, texture… I have never tasted like this before, especially I was astonished by the tenderness of pork. The meat simply melted in my mouth, without biting. The fatty part was like pudding, and don’t even feel it would hurt my cholesterol number. Quantity was a lot, so just a two of us could not finish all. I brought it back to my home and ate with steamed rice the next day, which was also tasty. 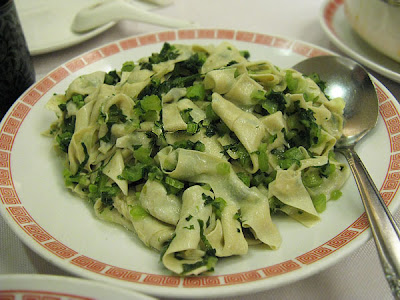 雪菜百頁 (NT$ 420). This was interesting item. I am not quite sure what it was, but I believe it was something like Yuba (湯葉). Yuba was cooked with interesting vegetable, so-called 雪菜. I have tried雪菜 before, and I kinda like feeling in my mouth when I bite it. 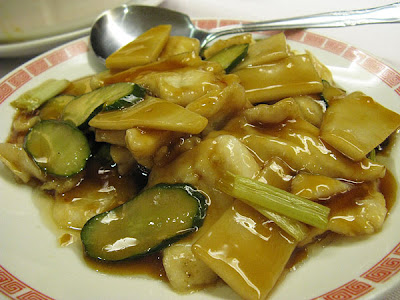 Last item is Sour Fish (醋溜魚片). To tell you the truth, it was okay taste among other items. I think it is just because of my taste. Of course, it was delicious, but I personally not a huge fun of sourness. Sweetness and sourness, for me, are a bit too strong taste for me. I like light taste, as close as raw or original taste. So this dish had heavy taste. I also thought their fish was not fresh enough, which was disappointing. Ironically, this was the most pricy dish in this lunch.

Their service was alright, but they could train workers more properly since their food is great. Sadly, the friendliest person was a guy in bullet parking. I would like to go back there again to enjoy their braised pork. Next time, I hope I get just a little bit better service.

http://www.shanghaikitchen.com.tw/
Posted by North at 12:00 AM No comments: 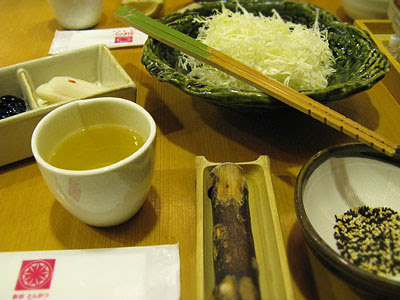 I chose the branch in ZhongXiao SOGO. It was a long line, so we waited for 30 minutes or so. The waiter guided us to the comfortable table. Our seat was in good place, and I was quite happy about it. The décor was simple, but it looks old. Also, some families with kids and babies were eating dinner, so it was quite noisy.

The other waitress came to us and explained their menu and system since it was a first time for us to visit them. According to them, shredded cabbage, rice, miso soup and appetizer are all refill free. Yes! (^^) Their workers were well trained, and friendly. 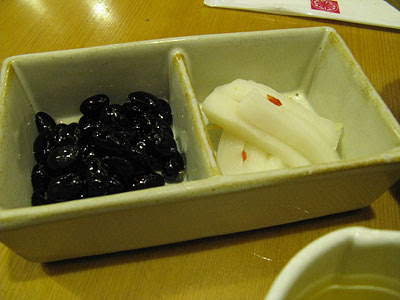 Their appetizer was black beans and Japanese radish pickles. This Daikon pickles reminded me of one Japanese restaurant my friend and I always went in the states. Good memories… Black beans were a bit sweet, tasted alright. 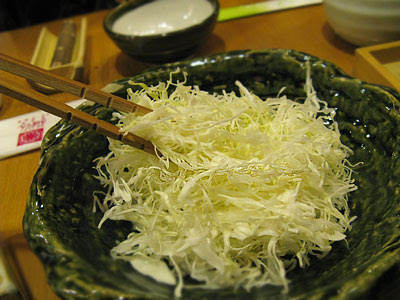 Shredded cabbage (キャベツの千切り) is always served with Katsu. I always eat a lot. 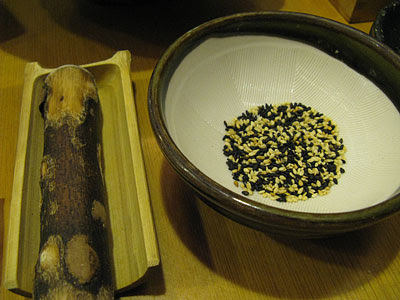 Same as Anzu, sesame was served. 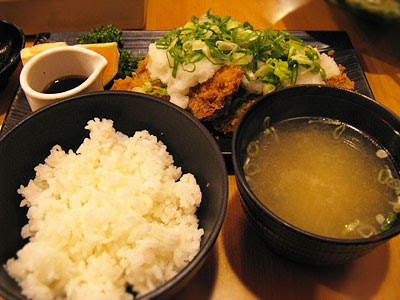 Item was served in front of me. 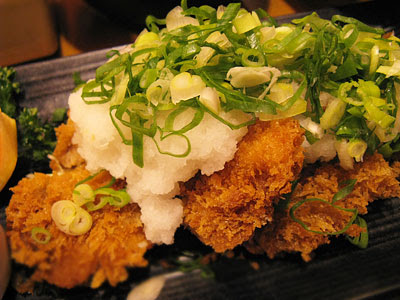 Negi Oroshi Rosu Katsu looked great! Katsu was politely laid on the plate, covered Daikon Oroshi. I thought their Oroshi was a bit dry, but it was still tasty. Katsu was juicy and chewy enough to enjoy the taste of pork. Unfortunately, my rice was already cold. What happened!?!?!? I asked Okawari, and the second bawl was warm enough. 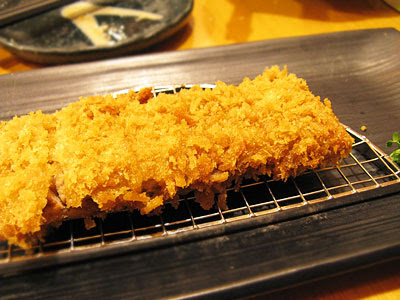 My friend’s Hirekatsu was, to be honest, so disappointing. I don’t know what happened. Did they serve different item or what? This katsu was quite different than we expected. Meat was thinly sliced, and wrapped to make it katsu shape. I found the similar item on their menu, which was called “Kasane Katsu” (千層錦豬排). But… Hire is usually not Kasane Katsu, right? I really want to know if we ordered it wrong, or they served wrong item… Taste of meat was not bad at all, but still quite different than Hire. Sorry my friend… 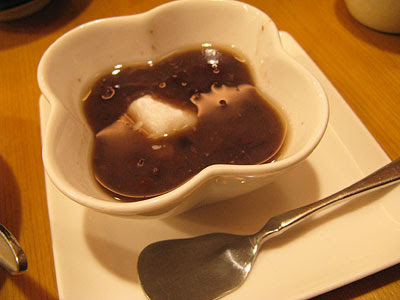 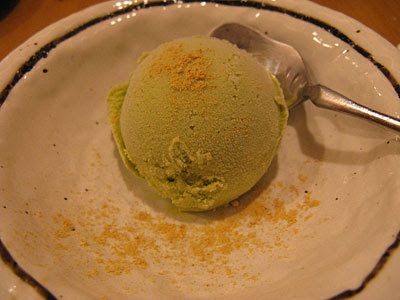 Both katsu set included a small dessert. Both dessert items were good: Oshiruko and Green tea Ice cream. We enjoyed it.

Overall, I liked their appetizer and everything but Katsu, such an ironic. I believe Anzu’s Katsu matches more to my taste, and it is close to a real Japanese style, although their sauce and other appetizer are alright. As a Japanese, Katsu in here couldn’t satisfy me.

I would like to visit them again to confirm their Hire katsu... If that was all they have, then I’d rather cook it by myself. It is all about a quality of the meat. I hope I will be satisfied with their food next time.

Saboten: Japanese Tonkatsu Restaurant
http://www.saboten.com.tw/index.php
Posted by North at 12:00 AM No comments:

Going back to Taipei

Aww.. it is time to go to Taipei again… 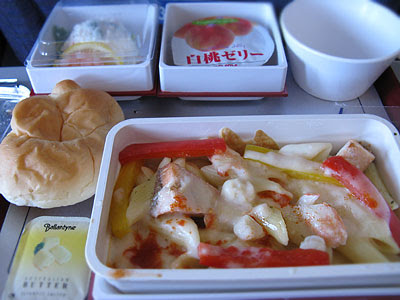 This time, I tried salmon past. It was pretty good.

North
North eats out in and around the city of Sapporo, Japan, and anywhere she goes for traveling. She recently moved to Taipei, Taiwan. She is really excited to experience great food and culture here. Her target is the cheap but delicious food. Please drop some positive comments and let me know if you know any good food. :)